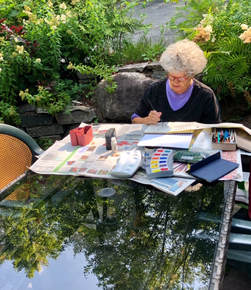 Jennifer Leighton’s artistic life has been exponentially enhanced by her work as a social worker and psychotherapist since 1966. Early on she was influenced by humanistic philosophy and later, by complexity theory. When one deeply engages with another person it is much like a new canvas existing as a fresh experience.

Originally a self-taught artist, she began drawing in earnest in 1979. She completed numerous commissions - graphite and colored pencil portraits of people, cats and dogs.

In 2002 she began working with Lynn Preston, an experienced abstract painter. Her Pandora’s Box opened. A metamorphosis occurred whereby acrylic paint and collage on large surfaces grew wild and colorful. Her use of line emphasized strongly contrasted color fields. Movement and countermovement began to add tension and move in relation together.

In 2009, she wandered into the Large Scale Abstract Drawing Workshop at the Woodstock School of Art. Taught by Meredith Rosier, she re-discovered her first love: drawing. This time her passion for color complexity met with pastels, inks and pencils. She looked to Kandinsky, Baziotes, Elizabeth Murray and Flora Crockett among others to further explore line and its ability to invigorate the picture plane.

To this day, she continues to transform the materials with which she works into the sphere of the spirit. Her studies with Meredith Rosier and Lynn Preston continue and she frequently exhibits her drawings and paintings.

In 2016 Jennifer became a member of the National Association of Women Artists.